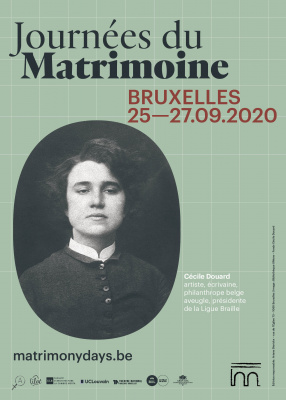 Matrimony, n. mr. : Designating marriage in Old French (matrimonium in Latin), the word was taken up in the 2010s in the expression cultural heritage, creating a female parallel to "heritage" to designate property, material or immaterial, having an importance artistic or historical heritage inherited from women.

If the Heritage Days have been around for decades, the Heritage Days were missing in Belgium. Initiated in Paris, 5 years ago, the Journées du Matrimoine are spreading in France… and now in Brussels for the second consecutive year. On the initiative of the non-profit organization L’Ilot - Sortir du sans-abrisme and the platform L'architecture qui degenre, the Matrimoine Days will take place in Brussels on September 25, 26 and 27, 2020.

This second edition will highlight, on the one hand, the historical Brussels marital heritage - architectural, sculptural, town planning, social. On the other hand, the Days will also be an opportunity to discover the current heritage - artistic, political and feminist. Beyond the discovery of the Brussels heritage that is sometimes, even often, eclipsed, the fundamental question of access to property for women and to related professions will be raised transversally during workshops led by experts and throughout the visits. conducted by professionals in the field. The entire program will thus make it possible to report on the participation of women in the many trades linked to heritage.