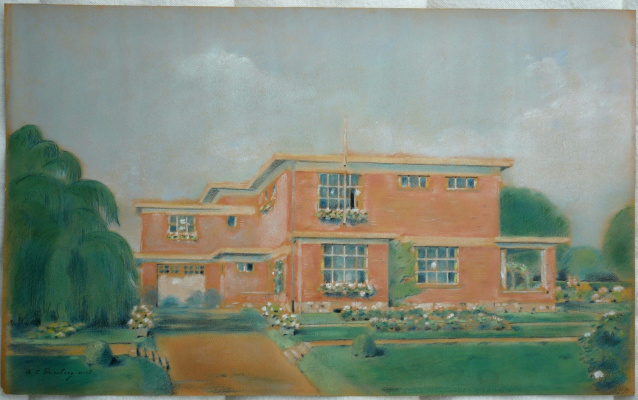 Until his death in 1951, A.-C. Duesberg built a lot of buildings, especially in Verviers, his birthplace, but also in Liège, Brussels ... Many are still visible today.

He is not only an architect, he also excels in drawing which he taught at the Academy of Fine Arts in Verviers during the First World War alongside Philippe Derchain. He is also a friend of Maurice Pirenne, whom he met in Brussels during his studies and who married his sister Maria. Just like Philippe Derchain, Maurice Pirenne and Georges Le Brun are part of the first generation of “Intimists from Verviers,” artists who represent villages or natural corners of the Verviers region and, when a person appears in their canvas, it is in the calm required by the concentration of meticulous work. A selection of their works, often in soft tones, will be visible during the exhibition dedicated to the architect Duesberg.

Until 1914, Albert-Charles Duesberg created homes and villas in a style steeped in classicism, influenced by English domestic architecture. Subsequently, he built industrial buildings in Liège as well as Verviers and built workers' houses in Ensival and Verviers in the "English cottage" style. He also creates villas in a modernist style with flat roofs and for some of them, he also designs the interior decoration and the gardens in the same aesthetic unit.

In 1931, he was hired by the State to build the Institute of Mechanics, the Thermoelectric Power Plant and the Thermodynamic Laboratory of the University of Liège on the Val-Benoît site. But in 1933, his outspokenness and his incisive remarks against the university administration forced the state to end his contract. After several trials, Duesberg wins his case.

In 1938, he coordinated the general establishment of the ephemeral village of Gai Village Mosan, designed for the International Water Exhibition. On this occasion, he built a modern church and a demonstration farm there.

Until 1945, Albert-Charles Duesberg was a member of the Administrative Commission of the Municipal Museum, the curator of which is none other than his brother-in-law, Maurice Pirenne. Joining this commission allowed him to show his attachment to heritage and defend it.

The exhibition revolves around four main themes: art drawing, very present in this architect; plans and technical drawing; flat roofs, an architect's hobbyhorse from the 1930s; and the man of convictions, between tradition and modernity.

The documents that you will discover exclusively in this exhibition have been carefully preserved by Madame Paul Hoffsummer, granddaughter of the architect, who donated them to the International Center for the City, Architecture and Landscape (CIVA). Others come from the architect's family.

The exhibition is accessible from Wednesday to Sunday from 1 p.m. to 5 p.m.